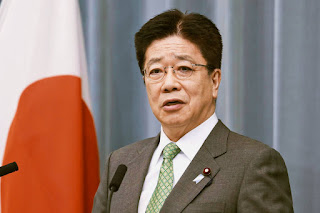 UMMATIMES - Japan on Tuesday (6/4) extended unilateral sanctions and a ban on all trade with North Korea by two years.
The move, approved by Prime Minister Yoshihide Suga's government, aims to pressure the communist country to halt its nuclear and missile programs, Kyodo News reported.
Japan imposed sanctions on North Korea after Pyongyang first tested a nuclear weapon in 2006, banning the import and entry of vessels registered in North Korea and which have stopped at North Korean ports. Tokyo also expanded the scope of punitive measures by banning exports in 2009.
It also blames North Korea for the kidnapping of its citizens in the 1970s and 1980s, which remain a significant obstacle to normalizing relations between the two countries.
The sanctions remain extended even though Prime Minister Suga has expressed his willingness to meet North Korean leader Kim Jong-un.