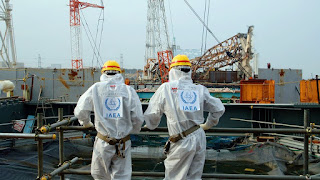 UMMATIMES - The Japanese government decided to start releasing a large amount of radioactive water that had been stored in the tank of the Fukushima nuclear plant into the sea. This move comes after years of delays due to concerns over the process and safety of this measure.
As reported by Stuff, the decision came after a meeting with the Japanese Cabinet ministers was held on Tuesday (13/4). According to them, releasing water from the damaged nuclear plant tank was the best option.
Water has been accumulating and stored in tanks at the Fukushima Daiichi nuclear power plant since it sustained damage in 2011 due to the earthquake and tsunami. Just then, the cooling water from the damaged reactor leaked.
The operator of the tank, Tokyo Electric Power Co (TEPCO) said water storage capacity would be full by the end of 2022. Japanese Prime Minister Yoshihide Suga told a ministerial meeting that the government was adopting releasing water into the sea as the most realistic measure.
Suga emphasized that water discharge is inevitable in order to achieve a complete recovery of the Fukushima nuclear power plant. However, TEPCO and authorities say tritium, which is harmless in small amounts, cannot be removed from the water.
However, all other radionuclides can be reduced to levels permitted for release. Some scientists have previously said the long-term impact of water releases on marine life is not yet known.
That's according to scientists, both from exposure to low doses to large volumes of water. Based on the basic plan report adopted by the ministers, TEPCO was asked to prepare to start releasing water into the sea within about two years after constructing the facility under the safety requirements of the regulatory authority.