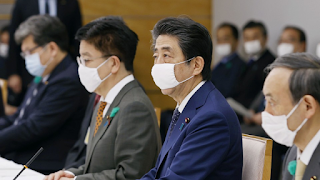 UMMATIMES - A subcommittee of infectious disease experts to fight the coronavirus has approved a government policy to implement "priority measures such as prevention of spread" particularly to Tokyo, Kyoto and Okinawa from April 12, 2021.
The Government's Subcommittee on Basic Management of infectious diseases which was held on Friday (9/4/2021) morning was also attended by the Minister of Economic Revitalization, Yasutoshi Nishimura, to hear opinions from infectious disease experts and others regarding actions against the corona virus.
"The number of new positive cases continues to increase nationwide. I think one of the main factors is the flow of people being very active in March and April. With the spread of new mutant strains in the background, I have a very strong sense of crisis."
"Therefore, we will implement priority steps such as preventing the spread, especially in the three prefectures of Tokyo, Kyoto and Okinawa, and the Japanese PM will officially announce it tonight," said Minister Nishimura, Friday (9/4/2021).
Since the completion of the PSBB (Emergency Declaration) period on March 21, new mutants of the corona virus have emerged, and then a new term "Priority Action" has been launched which is at a similar level to the PSBB but is more limited to a few regions.
The law also refers to the Anticipation of Infectious Diseases Law which was updated and passed by the Japanese parliament some time ago.
Therefore, Tokyo Governor Yuriko Koike began to remind loudly yesterday that violating the law in anticipation of corona, will be subject to a fine of 200,000 yen when the Priority Action is taken effect or 300,000 yen when the PSBB is activated.
In addition, Minister Nishimura said that the priority action target areas to be decided by the governors of the three prefectures were 23 regions in Tokyo and 6 cities in Hachioji, Tachikawa, Musashino, Fuchu, Chofu, and Machida, as well as Kyoto in Kyoto.
Okinawa is expected to be the nine cities on the main island of Okinawa, including Naha City. Nishimura also requested that people refrain from going to and from other areas and that they should refrain from going out if it is not necessary.
"I want to emphasize it more seriously," said Nishimura. However, Nishimura stressed he wanted to do his best in working with each governor so as not to make it a bigger epidemic.
Following reports and questions raised by the Steering Committee of the two houses of the Japanese Parliament, the government opened the countermeasures headquarters starting at 6:00 p.m. this April 9 and implemented "priority measures" in the three prefectures.
In addition, priority actions will also be applied to the three prefectures of Osaka, Hyogo, and Miyagi so that they will become six prefectures including Tokyo, Kyoto and Okinawa in the future.