Japanese PM; Decide How to Dispose of Nuclear Plant Wastewater 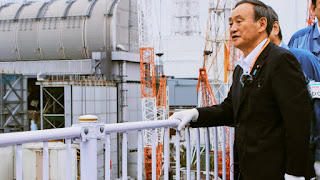 UMMATIMES - Prime Minister Yoshihide Suga has announced his intention to make a decision on how to dispose of water containing radioactive substances such as tritium, which is rising at TEPCO's Fukushima Daiichi Nuclear Power Plant, in the near future.
"Regarding the reconstruction of Fukushima, the treatment of contaminated water is an unavoidable problem. In such circumstances, it is very meaningful to have discussions with fisheries officials and discuss various positions," said PM Suga tonight (7/4/2021).
Prime Minister Suga met with the Chairman of Kishi from the National Federation of Fisheries Cooperatives at the Prime Minister's Office about how to dispose of water containing radioactive substances such as tritium. After that, Prime Minister Suga conveyed it to reporters.
"I am talking about the evaluation of the experts and the damage caused by rumors during the six years of consideration. I have received opinions including today's interview with the Chair of the Fisheries Federation. So it is time that I will immediately decide based on that opinion. I want to make an internal decision first. However, efforts to minimize the damage to reputation are absolutely necessary, "he stressed again.
Regarding the corona infection which is spreading rapidly again in Osak and in Tokyo, PM Suga is still coordinating with experts and in time will decide to immediately anticipate so that the spread of his corona infection can be contained again.
Today (7/4/2021) the spread of corona infection in Osaka is the most severe and highest reaches 878 people and Tokyo is increasing per day reaching 555 people.