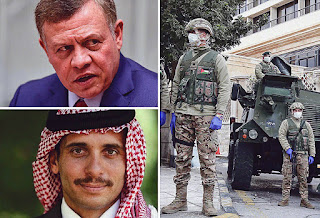 UMMATIMES - Prince Hamzah bin Hussein, who was a candidate for successor to the throne of the Kingdom of Jordan, is in the international spotlight. King Abdullah II arrested and put him under house arrest because he was considered to threaten the stability and security of Jordan. In fact, he is said to have conspired with foreign intelligence agencies.
Shortly after Hamzah bin Hussein was placed under house arrest, various countries reacted immediately. The majority gave their support to King Abdullah II, alluding to the importance of Jordan's conditions for maintaining regional stability. The following is the reaction of several countries gathered by Tempo from various sources, Monday, April 5, 2021.

"We continue to monitor developments and maintain contact with the Jordanian government. King Abdullah is an important partner for America and he has our full support," said State Department spokesman Ned Price.

"We support all decisions and actions taken by King Abdullah II and the crown prince to defuse all threats to Jordan's security and stability," said the UAE State Secretary Ministry. The UAE added that it is not an easy matter to maintain relations with countries that are in trouble, but it is needed for regional stability.

"Iran is against all internal instability and foreign intervention. We believe that all internal problems of a country must be resolved under the laws that apply there," "Internal instability in the West Asia region will benefit the Zionist regime (Israel). There is always a trace of this regime in every problem in Islamic countries," said Iranian Foreign Ministry spokesman Saeed Khatibzadeh.

"Palestinian President Mahmoud Abbas stands beside the Hashemite Kingdom of Jordan and its king, government and citizens. We support the decision taken by King Abdullah II to maintain stability, security and unity in Jordan," said a Palestinian government press statement.

"We do not see stability and tranquility in Jordan, a country that is so important for security in the Middle East ... We convey strong support for King Abdullah II and the Government of Jordan, including the prosperity and welfare of the brothers and friends there," said a press statement. Turkish Government.