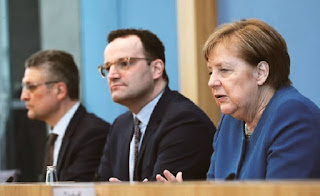 UMMATIMES - According to the latest monthly survey from Deutschlandtrend, only 35% of Germans still claim to be satisfied with the performance of the federal government, while 64% express their disapproval of Berlin's policies. The survey results have changed a lot when compared to November last year, when around 70% agreed.
The survey also showed 58% of Germans were satisfied or very satisfied with Chancellor Angela Merkel's leadership and made her the most popular political figure.
The Prime Minister of the Bavarian state and leader of the Social Christian Union (CSU) party Markus Söder is the second most popular political figure with a share of 54%. Meanwhile, Minister of Foreign Affairs Heiko Maas, who is from the Social-Democratic Party or SPD, is in third place with 43% satisfaction.

German citizens' assessment of the handling of the pandemic

The survey showed that only 19% of Germans were satisfied with the response of the federal and state governments to the handling of the coronavirus pandemic in April 2021. Meanwhile, 79% opposed government action.
The number of residents who feel dissatisfied is because the number of corona virus infections continues to increase throughout the country. Merkel has also asked residents to comply with social distancing rules during the Easter holidays this week.

The response of the Germans if elections are held this week

As the pandemic worsened, the ruling CDU Party experienced a decline in support of nearly 10 points since mid-December 2020.
If federal elections were to be held on Sunday (04/04), only 27% of Germans would say they would vote for the CDU, 22% of respondents would vote for the Greens, and 16% would say they would vote for the Social Democratic Party (SPD).
The survey also measured how Germans project a replacement for Merkel. CDU leaders Armin Laschet and Söder are considered the best chancellor candidates for the CDU / CSU in September's federal election.
Only 19% of Germans believed Laschet would be a good candidate for CDU / CSU chancellor in the April survey, while 54% said Söder would be a good candidate. Söder consistently outperformed Laschet in opinion polls on who would be the better candidate for chancellor.
The survey of 1,348 people was conducted from March 29-30, 2021, with questions shared online as well as by telephone.