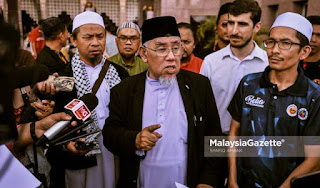 UMMATIMES - Malaysian Muslim groups condemned Saudi Arabia's plans to carry out normalization with Israel. President of the Malaysian Islamic Organization (MAPIM) Deliberation Mohd Azmi Abdul Hamid said he was surprised by the statement by the Saudi Foreign Minister who said that normalization with Israel brings tremendous benefits to the region.
"This is absolutely outrageous and completely absurd," Azmi said in his statement on Tuesday. Azmi emphasized that MAPIM refused to Saudi Arabia and any Muslim country to submit to Israel.
"The Saudi move to normalize with Israel is the final betrayal not only for the Palestinian cause but also for the entire umma," said Azmi.
Azmi also urged Muslim countries not to comply with the normalization agreement. They must remain united and firm in the struggle to liberate Palestine.
Earlier, Saudi Arabia's Foreign Minister Faisal bin Farhan said on Thursday that the possibility of his country normalizing relations with Israel remained open. He believes that this will be good for the Middle East region, especially in the economic, social and security fields.
“There is, of course, a normalization agreement with Israel on the table - it has been in discussion since 2002; it's called the Arab peace plan, "said Prince Faisal.
However, Faisal emphasized that the normalization of this relationship could only be realized if there was progress in the peace process between Israel and Palestine.
"I don't know if (the agreement) will happen soon, it really depends on the progress of the peace process," said Prince Faisal.