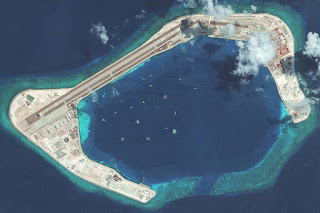 UMMATIMES - The Philippine military has documented the presence of illegal structures on the Union Banks, Spratly Islands, in the South China Sea (LCS), not far from where hundreds of Chinese ships swarmed last month.
Philippine Military Commander Lt. Gen. Cirilito Sobejana said the illegal structures were not far from islands claimed by the Philippines, including in its exclusive economic zone. "Construction and other activities, economic or otherwise, are detrimental to the peace, order and security of our territorial waters," Sobejana said in a statement on Thursday.
He did not say which country built the structures or how big they were. The buildings were discovered on March 30, during a military maritime flight patrol over the South China Sea, where the Philippines is closely monitoring the activity of Chinese vessels - believed to be manned by militias.
"Our efforts to obediently carry out our mandate to protect and advance our national interests in the region continue without a hitch," said Sobejana.
The islands and reefs of the Spratlys are the most contested subject in the world. Vietnam, China, Taiwan, the Philippines and Malaysia erected buildings, small communities and artificial islands in the region to stake their territorial claims in this strategic waterway.
Sobejana's remarks come as part of a renewed push by the Philippine military and diplomats to publicly oppose China's maritime activities - after years of silenced criticism. Philippine President Rodrigo Duterte has pursued closer ties with Beijing.
Duterte said challenging China's actions was futile and dangerous. The national security advisers of the United States and the Philippines held a telephone conversation on Wednesday (31/3). Advisors discussed their concerns over China's activities in the LCS. Philippine Foreign Minister Teodoro Locsin will meet his Chinese counterpart this week.