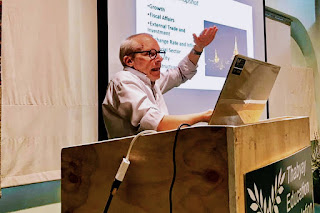 UMMATIMES - Australia asked the ruling military in Myanmar to immediately release its citizen who is also economic adviser to Aung San Suu Kyi. The economist has been detained by the military junta for two months.
Sean Turnell, a professor of economics at Macquarie University in Sydney who has advised Suu Kyi for years, was reportedly charged a week ago under Myanmar's official secret law, along with Suu Kyi and several of her ministers.
Describing it as "arbitrary detention", the Australian Department of Foreign Affairs and Trade said in a statement that Turnell had been detained with limited consular access.
"Australia continues to seek immediate release and official information on the reasons for his detention both in Myanmar and through the embassy in Australia," a foreign ministry spokesman said in a statement.
"We call on the military regime to allow Professor Turnell to return to his family in Australia."
Turnell is the first foreign national to be arrested after a February 1 military coup overthrew Suu Kyi's government.