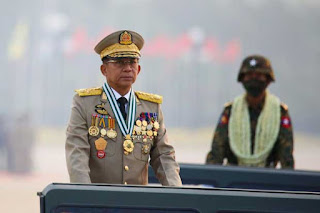 UMMATIMES - Myanmar military junta leader Min Aung Hlaing will attend the ASEAN Summit in Indonesia on April 24.
The presence of the Myanmar coup leader who removed the legitimate leader Aung San Suu Kyi was confirmed by Thailand as reported by Reuters, Sunday (18/4/2021).
It said this would be his first known foreign trip since he seized power from the civilian government on February 1.
"Several leaders from the 10 ASEAN members, including Min Aung Hlaing, confirmed they would attend the meeting in Jakarta," said Thai foreign ministry spokesman Tanee Sangrat.
Myanmar has been in turmoil since Min Aung Hlaing toppled an elected government led by the winner of democratic elections, Aung San Suu Kyi.
Security forces have killed 728 civilians who opposed the coup-result government, according to activist groups. The majority of the victims were shot dead by security forces when they voiced their protest on the streets.
Myanmar's neighbors have tried to push for talks between the junta and the ousted government, but the military has shown little willingness to get involved.
The spokesman for the military junta did not respond to reports that the leader of the military junta would attend the ASEAN Summit in Jakarta.
Pro-democracy politicians including members of parliament who were ousted on Friday announced the formation of a National Unity Government (NUG) including Suu Kyi and leaders of anti-coup protests and ethnic minorities.
The NUG has called for international recognition as a legitimate authority, and requested an invitation to the ASEAN meeting in Jakarta.