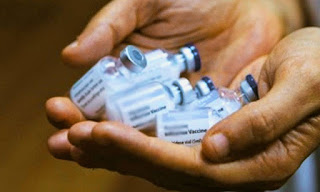 UMMATIMES - Pakistan is selling the Covid-19 vaccine commercially to the general public. Vaccines are sold after the government issues commercial import licenses by the private sector.
The first round of commercial sales of the Sputnik V vaccine from Russia was a hit. The vaccine is sold to the general public for 12 thousand Pakistani rupees or 80 US dollars for a vaccine pack containing two doses.
The commercial sale of the Covid-19 vaccine has been welcomed by Pakistanis, especially young Pakistani children who are not eligible for the free vaccine from the government. Long lines were seen at a number of vaccination centers. Some had to wait in line for nearly three hours. The Pakistani government provides free vaccines only to medical personnel and citizens over 50 years of age.
"I am very happy to have it, because now it is necessary to travel," said Saad Ahmed, 34.
While sales of the vaccines had started, the Pakistani government and importers were still caught in a price dispute. The government initially agreed not to impose a price limit. However, the decision was overturned and the government set a maximum price.
s
One pharmaceutical company that imported 50 thousand doses of Sputnik V vaccine filed a lawsuit over a dispute over the price of vaccines for the general public. The company won the court. The company is allowed to sell vaccines at the price set by the company, until the government sets the price.