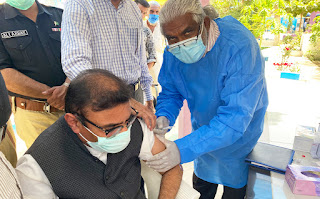 UMMATIMES - The Sindh provincial government in southern Pakistan launched a vaccination campaign to inject prisoners aged 50 and over. The move is part of a vaccination campaign that is expected to be carried out by other provinces.
The Karachi Central Prison is where the vaccinations were launched after nearly a quarter of the prison population tested positive for the coronavirus (Covid-19) last June. The prison, with a capacity of 2,400 inmates, currently holds 5,000 inmates.
"Covid-19 is the greatest disaster facing humanity today. We are proud of the Sindh government, which has taken effective and timely action," said Inspector General of Prisons in Pakistan, Kazi Nazir Ahmad. ).
Ahmad added the prison department was the first in the country to start vaccinating prisoners and prison staff. The effort aims to inject 1,882 inmates and 641 prison staff across prisons in Sindh.
Prisons in Pakistan are very crowded. Prisoners are vulnerable not only because they live in high-risk environments in old and poorly ventilated buildings, but also because they often have health conditions that worsen the prognosis if they fall ill.