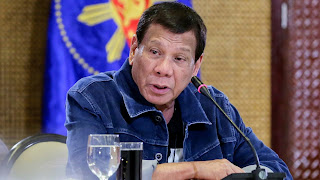 UMMATIMES - Philippine Presidential Palace spokesman Harry Roque said President Rodrigo Duterte was in good health. He denied the news that Duterte had contracted Covid-19 after the staff around him were infected with the virus.
"(The President) remains fit and healthy for his age," Roque said in a statement quoted by Arab News on Friday (9/4). Roque had announced that 126 members of the presidential security team had tested positive for Covid-19. However, he chose to thank the people of the Philippines for voicing their concern.
"The people hope for the strength and health of the President because so far he has continued to carry out his function as head of government," said Roque. Former Duterte assistant Senator Christopher Go also announced that the president had tested negative in his latest swab last week. He stressed that the president was regularly tested for Covid-19.
"You don't need to worry, but we can't take risks. So far, with God's mercy, he's negative (from Covid-19) based on his last swab test," Go said.
On Wednesday (7/4), Go posted three photos showing the president sitting in front of him at a table filled with documents. His post seemed to deny the viral hashtag #NuansaAngPangulo (where is the president?) Which is a new trend on social media.
The hashtag follows Roque's announcement on Tuesday that the president has canceled his weekly public address scheduled for the day. Duterte was last seen in public on March 29 when he welcomed a number of Covid-19 vaccines obtained from China.