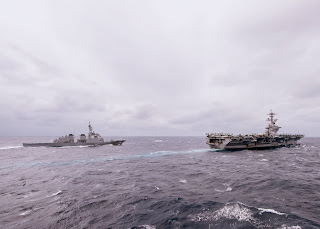 UMMATIMES - Senior Philippine officials contacted their colleagues from the United States to discuss the entry of Chinese military vessels into their Exclusive Economic Zone in the waters of the South China Sea.
"United States National Security Adviser Jake Sullivan and Philippine National Security Adviser Hermogenes Esperon agree that the United States and the Philippines will continue to coordinate closely in response to challenges in the South China Sea," wrote a White House statement quoted from Aljazeera, Friday, April 2, 2021.
Sullivan underlined that the United States supports our Philippines in upholding a rules-based international maritime order. "Reaffirming the implementation of the US-Philippines Joint Defense Agreement in the South China Sea," the statement said.
The senior officials' communication follows reports Wednesday that the Chinese fleet of ships is spreading more widely within the Philippine EEZ. Last week it was revealed that as many as 200 ships, which are believed to belong to Chinese militias, are anchored at Whitsun Reef, about 320 kilometers west of Palawan Island, and in the Philippine EEZ as determined by the International Arbitration Court.
In a statement, the Philippine government reaffirmed their sovereignty and jurisdiction over the islands and sea lanes that surround the waters of the South China Sea. They regretted the steps taken by China which continuously violated the country's sovereignty. The Philippines asked China to withdraw these vessels immediately.