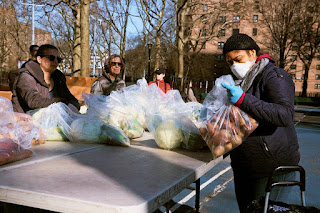 UMMATIMES - Carla Lacerda used to earn a good salary selling duty-free goods to tourists arriving at the Algarve airport in southern Portugal. He had to lose his job last August because of the Covid-19 pandemic. She quickly ran out of money to feed her two children.
The 40-year-old man now receives around 500 euros per month as unemployment benefits. This condition left him with no choice but to join the line for food donations.
"I never thought I would be in this situation. It's sad I have reached this point, but I am not ashamed," said Lacerda as he waited for milk, vegetables and other essential items at the charity Refood in Faro, the capital of the Algarve.
Lacerda is one of thousands of people whose lives have been turned upside down by the pandemic. The Algarve food bank, which has two warehouses in the region, is now helping 29,000 people, nearly double the number before the pandemic.
"This is the first time since food banks started in the Algarve that the numbers have reached such levels," said the region's food bank president, Nuno Alves.
Alves stated, poverty spreads throughout the middle class. People from the tourism sector were hardest hit.
Many businesses have to close and some may never reopen. In February, the number of people registered as unemployed in the Algarve jumped 74 percent from a year ago, more than in any other area of ​​Portugal.
In addition to using food banks to help residents affected by the pandemic, restaurants and supermarkets in the Faro area also helped. Refood Faro collects unwanted food from restaurants and supermarkets and distributes it to the needy.
172 families line up for supplies each week. This condition has also increased by about 160 percent since the pandemic began. "We help an architect, a teacher, a nurse, a social worker," said the coordinator, Paula Matias.
The vice president of the community organization MAPS, Elsa Cardoso, said requests for help were increasing and some people who used to work in tourism were now homeless. "Every day there are more people who are no longer able to support themselves, who have been evicted," said Cardoso stressing that it would take a while to improve the situation.