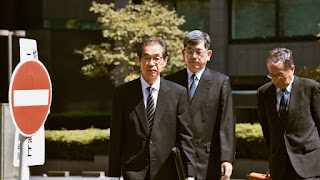 UMMATIMES - During the next half year, the salary of the President of Tepco Holding Japan (THD) as much as 30% of his salary will be returned to his company including three other officers.
This is part of their responsibility for a series of scandals, such as the inadequate actions against terrorism at the Kashiwazaki-Kariwa Nuclear Power Plant, Chuo-ku, Niigata City and the case of the nuclear plant in Fukushima as well.
"A similar case has never occurred at any other power company, and Tepco wants to take the problem very seriously so that big doubts can be dispelled in the future. I want to thoroughly investigate the causes and clarify the truth," said Tomoaki Kobayakawa, THD President this afternoon (7 / 4/2021).
The Japanese government's Nuclear Regulatory Authority has decided to prohibit TEPCO from transferring nuclear fuel at the Kashiwazaki-Kariwa nuclear power plant in Niigata Prefecture, central Japan, after it was found to be deficient in anti-terrorism measures at the facility.
In addition, TEPCO has left a faulty seismometer at reactor No. 3 at Fukushima No. 1 in Fukushima that was not repaired.
The strong earthquake waves that hit the northeastern Tohoku region of Japan, including Fukushima, on February 13, 2021 were not measured as a result.The earthquake was recorded up to 6 magnitudes more due to the damage to the seismometer.
President Kobayakawa also apologized to Fukushima Governor Masao Uchibori on Tuesday for a series of problems at the company's two nuclear power plants.
At their meeting at the Fukushima prefectural government office, Uchibori told Kobayakawa that the problem was "creating anxiety and distrust (of the company) among residents" in the northeastern prefecture of Japan.
"This is a very serious problem," said Uchibori, urging TEPCO to take all possible measures to prevent similar problems from occurring in the future, "stressed Uchibori.
Apart from Kobayakawa, whose salary will be cut 30%, Executive Officer Shigenori Makino, General Manager of the Nuclear Power & Locations Division, Executive Executive Officer Masaya Tachibana, Representative of Niigata Headquarters and General Manager of Niigata Headquarters, and Executive Officer Takeo Ishii, General Manager of Kashiwazaki Kariwa Nuclear Power Plant, all of that will also be cut 30% of his salary for the next 6 months.