Procedures at the Grand Mosque and the Prophet's Mosque during Ramadan 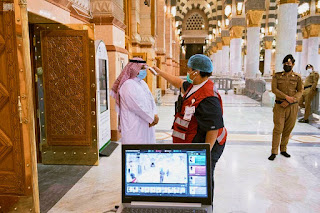 UMMATIMES - The government of Saudi Arabia released guidelines and standard operating procedures that must be adhered to and followed at the Grand Mosque and the Prophet's Mosque during Ramadan. The Head of the Presidency of the Two Holy Mosques, Abdul Rahman Al Sudais, said this step was to minimize the spread of COVID-19 among the congregation.
"I urge visitors from the Two Holy Mosques to get the COVID-19 vaccine to ensure the safety of them, pilgrims and other worshipers," said Al Sudais, Friday, April 2, 2021.
Some of the policies that will be implemented in the upcoming Ramadan are: restrictions on access to the two mosques. Only those who have registered and received permission through the Eatmarna application can enter the Grand Mosque and the Prophet's Mosque.
In addition, the number of rakats for Tarawih prayers and Witir prayers was reduced from 20 + 3 to 10 + 3. "The congregation is allowed to pray at the Abdullah Expansion, the first floor, roof and courtyard of the Grand Mosque," said Al Sudais.
The mataf area, the area of ​​Muslims surrounding the Ka'bah, will remain closed to all but the Umrah pilgrims. Umrah pilgrims are also not allowed to touch the Ka'ba, and the normal separation will still apply.
When it is time to break the fast, takjil and food will be distributed directly to the congregation. Officers also provide 200 thousand bottles of zam-zam water every day to prevent the congregation from fetching water directly.
The management also prohibited the congregation from doing itikaf in the last 10 days of Ramadan in the two holy mosques.
Al-Sudais said his party had deployed around 10,000 officers to help organize the congregation so as to prevent crowds at the Grand Mosque and the Prophet's Mosque.