Restaurant is thief, the owner gives a gift to the thief 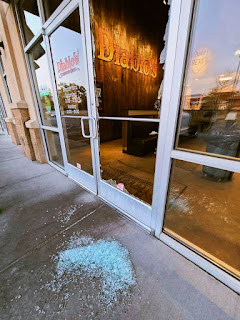 UMMATIMES - A restaurant entrepreneur in Augusta, Georgia, United States, had an unfortunate incident. The restaurant, called Diablo's Southwest Grill, was burglarized on Saturday (3/4/2021).
A photo shows the condition of the glass door of the restaurant that has been shattered. Meanwhile, another photo shows the figure of a burglar in his restaurant.
In the black-and-white CCTV footage, the figure who appears to be a man is wearing a long, bright dress. He was wearing a head covering, carrying a black object. The object is suspected to be stolen goods which he took from the restaurant.
However, it was not stated what items the thief had taken. "Our burritos were so popular that people broke them at 4 a.m.," Wallace wrote at the start of his explanation. Wallace said the restaurant door looked like it had been hit by a "violent storm." The thief broke the door, and broke into the restaurant. He left the restaurant in just 45 seconds. Until finally, the restaurant alarm went off.
However, instead of getting angry and trying to get back at the perpetrator's actions, Wallace gave an unusual solution. He offers a special gift for the thief and 'would-be' muggers out there.
Wallace offers vacancies to work in his restaurant. He felt sorry for the choice they had made as a way of life. Wallace thought, the thieves did their actions because they were caught in the economic condition.
"For would-be muggers who are struggling with life decisions or have financial problems ... please stop by to apply for jobs. There are better opportunities out there than this path you have chosen, "Wallace wrote. Wallace also wrote down his phone number in the upload.
The hope is for thieves to contact him if he is interested in the job vacancies he offers. Wallace also made sure no police were involved if the thief came to him. "No police, no questions. Let's sit down and talk about how we can help you and improve the path you are on. Yours sincerely, Carl, "he wrote.

Wallace told that at first he was angry and frustrated when he first saw the condition of his restaurant that was burglarized. However, he felt sorry for the thief. "(It feels like) You feel sorry that this is the path they chose in life."
"You also think about the harm they cause every time they do it," Wallace said. Wallace said he thinks the same person recently broke into two other places near his restaurant.
The man, who has been running Diablo's Southwest Grill for eight years, said the owners of businesses in the vicinity of his restaurant also told him that they had been the victims of attempted robbery.
Their CCTV footage also captures the same figure as the man who was caught by the CCTV camera at Wallace's restaurant. With the break-in happening, Wallace wanted to respond by forgiving the culprit. According to him, it was the right thing to do.
"It's about trying to mentor someone who is clearly on the wrong path in life," said Wallace.