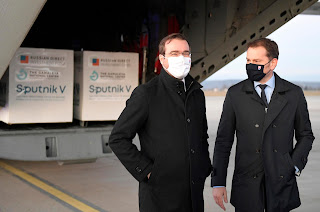 UMMATIMES - Russia recently asked Slovakia to return the Sputnik V vaccine it had received. This is because there are several alleged breaches of contract that are claimed to have occurred.
The official Twitter account of the Sputnik V vaccine said Slovak drug regulators had breached an existing contract in an act of sabotage to test Sputnik V. Primarily, in a laboratory that is not part of the EU's Official Drug Control Laboratory network.
In its official account, the agency posted a statement that the Slovak State Drug Administration has launched a disinformation campaign against Sputnik V and is planning additional provocations.
Quoting the AP Friday (9/4), responding to this, the Slovak institute said that the EU-certified laboratory network only tests vaccines registered in the European Union, and not the Sputnik case. He added that he did not know any details about the Russia-Slovakia contract because it was classified.
Sputnik V is not yet approved for use in the EU. However, the drug regulatory agency, the European Medicines Agency (EMA), began reviewing the vaccine last month. The Slovak drug agency said the Sputnik V vaccine reviewed by the EU was also different from the one shipped to Slovakia.