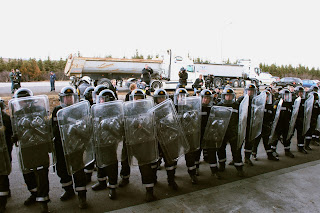 UMMATIMES - State procurement documents show that the Russian government has issued a tender to purchase riot equipment and police protective gear. These preparations come ahead of a protest designed by Kremlin critic Alexei Navalny's ally and will be the largest in modern Russian history.
An Interior Ministry tender was published on the online portal of Russian state procurement on March 30. This document shows a request for more than 2,000 police riot kits worth about 239 million rubles. Each kit includes body armor, helmet, and gaiters.
The Interior Ministry also issued a tender for the purchase of 1,625 protective gear, 200 helmets and more than 400 flak vests. In fact, in February the prison authorities issued a tender for the purchase of hundreds of tasers, smoke grenades and protective gear after a national rally in support of Navalny.
Navalny was jailed in February on charges he said were fabricated. He declared a hunger strike in an attempt to force the prison that was holding him to provide proper medical care for acute pain in his back and legs.
Navalny's allies, which have staged three demonstrations in the winter to demand release, said they would announce dates for a new nationwide street protest after 500,000 people had registered to attend. About 370 thousand people have registered to join. Authorities have called such street protests illegal and have promised to disperse them.