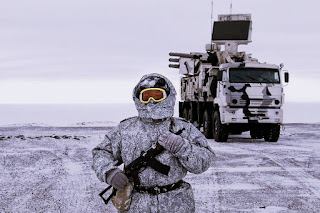 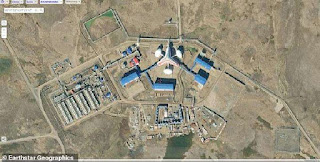 Satellite images from Maxar Technologies, show the construction of a striking Russian military base and hardware on the Russian Arctic coastline, along with underground storage facilities likely for the Poseidon and other new high-tech weapons.
Russian military equipment in the High North region includes MiG31BM bombers and jets, and a new radar system close to the Alaskan coast.
"There are clearly military challenges from Russia in the Arctic, including the repair of the old Cold War base and the construction of new facilities on the Kola Peninsula near the city of Murmansk," a senior US State Department official. Satellite images show airfields designed like fake boulders, with the red, white and blue Russian flags, at several locations along Russia's Arctic coast over the past five years.
The base is inside Russian territory and is part of the legitimate defense of its borders and coastlines. However, US officials have raised concerns that the force could be used to establish de facto control over a further Arctic region when the ice melts.
"Russia is upgrading its Soviet era airfields and radar installations, building a new port and search and rescue center, and building a conventional and nuclear-powered icebreaker fleet," said Lt. Col. Thomas Campbell, a Pentagon spokesman.
"Russia is also expanding its network of air and coastal defense missile systems, thereby strengthening its interceptor and territorial defense capabilities over major parts of the Arctic," said Campbell.
Campbell also noted the recent formation of Rapid Reaction Alert forces at two Arctic airfields, Rogachevo and Anadyr, and last year's Nagurskoye airfield trials.
Satellite imagery on March 16 shows a MiG31BM at Nagurskoye believed to be bringing Russia's new stealth air power capability to the far north.
High-tech weapons are also being tested regularly in the Arctic region, according to Russian officials quoted in state media and Western officials.
Campbell added that in November, Russia claimed to have successfully tested the anti-ship hypersonic cruise missile, the Tsirkon. The Tsirkon and Poseidon are part of a new generation of weapons promised by Putin in 2018 as a strategic game changer in global weaponry. 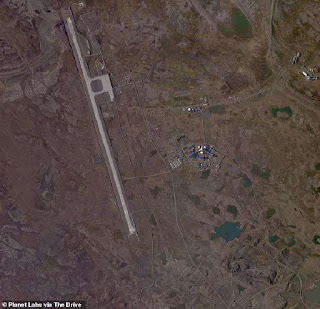 Russia has increased its military presence on aircraft runways and bases across the Arctic, such as at Nagurskoye Air Base. [Planet Labs / The Drive / Daily Mail]
Climate change has removed many of Russia's natural defenses in the north, such as the walls of the ice sheet. "The melting is moving faster than scientists thought or predicted a few years ago," said a senior US State Department official. "This will be a dramatic transformation in the next few decades in terms of physical access."
US officials also expressed concern over Moscow's apparent efforts to influence the North Sea Route (NSR), a shipping route that runs from between Norway and Alaska, along Russia's northern coast, crossing into the North Atlantic. NSR has the potential to shorten the time for container shipments to reach Europe from Asia via the Suez Canal.
Russia's foreign ministry declined to comment, but Moscow has long insisted its aims at the Arctic were purely economic and peaceful. Putin once mentioned the potential value of the Arctic's natural resource wealth at around USD 30 million. according to the Daily Mail report.
Russia, the US, Canada, Denmark and Norway have all tried to claim jurisdiction over parts of the Arctic, as shrinking polar ice opens up new opportunities to exploit resources and open up new shipping routes. Vladimir Putin regularly praises the importance of Russia's technological advantage in the Arctic.
"It is well known that we have a unique icebreaker fleet that holds a leading position in the development and study of the Arctic region. We have to reaffirm this advantage over and over, every day," Putin said in November at the launch of a new icebreaker at St. Petersburg. Petersburg.
The head of the Russian Navy, Admiral Nikolai Yevmenov, reported to Vladimir Putin that the exercise featured three nuclear submarines simultaneously penetrating the Arctic ice and a fighter aircraft flying over the North Pole, the Daily Mail reported.
The exercises were conducted in the vicinity of Alexandra Land, an island that is part of the Franz Josef Land archipelago where the military has recently built a base.
Among the new weapons tested in training was the Poseidon 2M39. Plans for the Poseidon torpedo were originally revealed in a document, apparently made public to reveal its capabilities, and leaked by a Russian general in 2015.