Russia; Make sure Alexei Navalny is well treated in prison 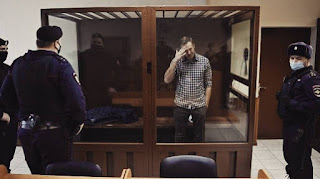 UMMATIMES - The Russian penitentiary assured Alexei Navalny well during his imprisonment. The remarks came to dismiss accusations by Kremlin critics that Navalny was not getting the health care he needed while in prison and experiencing sleep deprivation.
Navalny, 44, is among Russian President Vladimir Putin's critics. On Wednesday, March 31, 2021, he went on a hunger strike to protest the prison guards to give him the medical care he deserves. Navalny complained of pain in his back and legs.
At the end of last week, Navalny said prison wardens woke him up every hour. Not only that, his requests for health care were also ignored. Western countries have demanded that Navalny be released.
The IK-2 prison facility in the Vladimir region, which detained Navalny, said the actions carried out by the prison authorities did not violate the law. Navalny was the same before the law as other prisoners.
"Officers highly respect the rights of detainees to sleep 8 hours without being disturbed," said the community institution where Navalny was detained.
The prison warden is indeed in charge of patrolling and checking detainees at night. This action certainly did not disturb the rest of the convicts.
"Navalny is given all the medical needs he needs in accordance with his health condition," said the authorities.
Previously, Navalny wrote in handwriting about his conditions in prison. The article was uploaded by his team to social media on Wednesday, March 31, 2021. Navalny said he asked to be summoned by a doctor to check his health condition and asked to be given proper treatment, but his request was ignored.