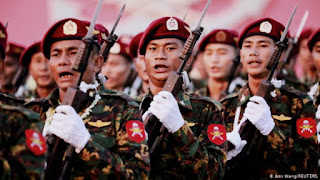 UMMATIMES - Russia says Western countries risk sparking civil war in Myanmar by imposing sanctions on the military junta that has seized power in a coup. Russia added that sanctions against the authorities were very dangerous.
"In fact, such sanctions contribute to playing against each other, and ultimately pushing the Myanmar people towards full-scale civil conflict," the Russian Foreign Ministry said, quoted by the Interfax news agency.
Russia is the main arms supplier to Myanmar. Last month, Russia's deputy defense minister met Myanmar military leader Min Aung Hlaing in the capital Naypyitaw. The meeting drew criticism from rights activists who accuse Moscow of legitimizing the junta.
Meanwhile, French Foreign Minister Jean-Yves Le Drian said he was preparing to impose collective sanctions on the Myanmar military targeting its business interests. Last month, the European Union imposed sanctions on a number of figures linked to the coup.
"We will add economic sanctions at level 27 (EU countries) against economic entities linked to the (Myanmar) army, so that (sanctions) can be applied very quickly," Le Drian told lawmakers.
A follow-up protest was held on Wednesday, calling for the burning of goods made in China. Many protesters oppose China, which is a major investor in Myanmar, as supporting the junta.
The military has mobilized its maximum force to confront the demonstrators. The political prisoners association (AAPP) advocacy group said about 570 people including dozens of children had been shot dead by security forces and police.
Pro-democracy demonstrations and civil disobedience continued across the country. The military junta has issued arrest warrants for dozens of celebrities, models and influencers who opposed the coup. Mizzima news site reported that on Tuesday (6/4) the authorities have arrested a popular comedian in Yangon.