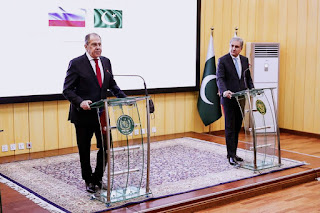 UMMATIMES - Russian Foreign Minister Sergey Lavrov met his Pakistani counterpart in Islamabad on Wednesday. The two discussed the stalled Afghan peace process.
The visit was the first of its kind by a Russian foreign minister in nine years, and comes at a sensitive time for Afghanistan as peace talks have made little progress. While the United States (US) has set a deadline for withdrawing its troops from the country.
"(Pakistan and Russia) share the same position on several issues ... including peace and stability in Afghanistan," Pakistani Foreign Minister Shah Mahmoud Qureshi said on Twitter after their meeting.
The two ministers also discussed economic relations, energy and counter-terrorism cooperation, and the progress of a major gas pipeline project. Lavrov will also meet Prime Minister Imran Khan.
In the 1980s, Pakistan and the US were the main supporters of the Islamic fighters who fought for the occupation of Soviet forces in Afghanistan. Now, Russia is concerned about Afghanistan's instability extending to central Asia as the US tries to escape the war in Afghanistan against the Taliban.
Russia hosted an international conference on Afghanistan in Moscow last month. Participants, including the US, China and Pakistan, issued statements calling on the warring Afghan sides to reach a peace agreement and endure violence.
"(Our) common concern is the situation in Afghanistan," the Russian Foreign Ministry said in a statement on Wednesday about Lavrov's visit to Pakistan.
"We look forward to the preliminary findings of a constructive solution to ending the civil war in the Islamic Republic of Afghanistan through an agreement on the establishment of an inclusive government with the participation of the Taliban movement," the statement said.
The US signed an agreement with the Taliban last year allowing it to withdraw its troops in exchange for Taliban guarantees to prevent international terrorism. But fighting between the US-backed Afghan government and the Taliban is still raging.
Under the agreement, the deadline for withdrawal of US troops is May 1. But US President Joe Biden said the deadline would be difficult to meet.