Saudi Arabia Bans Import of Vegetables and Fruits from Lebanon 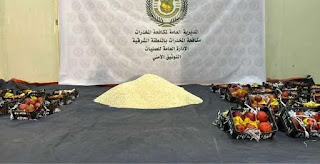 UMMATIMES - Saudi Arabia bans imports of vegetables and fruit from Lebanon. The kingdom said the reason was because the vessels for delivering vegetables and fruit were used to smuggle drugs. Saturday (24/4) Anadolu Agency reported through the SPA news agency, the Ministry of Interior of Saudi Arabia announced that products such as fruit and vegetables are often used by drug smugglers to smuggle drugs into Saudi Arabia. This prohibition came into effect on Sunday (25/4).
Saudi Arabia says this policy will continue until Lebanese authorities guarantee it has taken adequate and reliable steps to prevent smuggling. The ministry said it would also exercise close surveillance on other products from Lebanon.
The Lebanese Ministry of Foreign Affairs confirmed that Saudi Arabia had informed Lebanon of this decision. Lebanon has called on security agencies to do their best to prevent smuggling activities.
Like tightening security at the border gates. Given the existence of criminal laws against drug smuggling and use. Lebanon is still trying to form a new government amid disagreements between Prime Minister Saad Hariri and President Michel Aoun. The Arab country is experiencing a severe economic crisis.
The local currency has lost almost all of its value against the US dollar. Roads across the country were also closed by protests demanding the government immediately tackle the worst economic crisis since the 1975 to 1990 civil war.