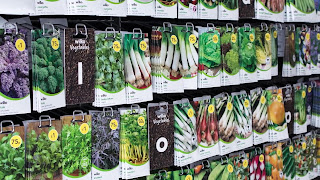 UMMATIMES - Seed laws criminalizing farmers for the use of a variety of crops are believed to have the potential to threaten food security. Food activists are also calling for the return of farmers' rights to seeds and plants.
For thousands of years of human cultivation, the intrinsic nature of seed (the ability to reproduce itself) prevented it from being easily commodified. The seeds can be freely exchanged and shared.
However, all that changed in the 1990s when new laws aimed at protecting bioengineered crops were introduced. Currently four companies, namely Bayer, Corteva, ChemChina and Limagrain control more than 50% of the world's seeds. This shocking monopoly dominates the global food supply.
"Control over seeds is control over food supplies. The question of who produces new crop varieties is critical to the future of all of us," said Jack Kloppenburg, a rural sociologist and professor at the University of Wisconsin-Madison.
According to the United Nations Food and Agriculture Organization, 75% of the world's plant varieties disappeared between 1900 and 2000. The richness of locally adapted crops was replaced by standard varieties. Experts warn that doing so could have serious consequences for food security, especially as the planet warms up.

Major producers of genetically modified and bioengineered seeds, such as Bayer and Corteva, severely restrict farmers from using the varieties they sell. Typically, buyers have to sign an agreement that prohibits them from saving the seed from their harvest for exchange or distribution the following year.
Most countries only allow patents (exclusive ownership rights) on genetically modified seeds. However, other plant varieties can also be strictly controlled by another intellectual property law called Plant Variety Protection.
The World Trade Organization requires member states to have some form of law protecting plant varieties. A growing number of them are meeting these requirements by registering with the International Union for the Protection of New Plant Varieties (UPOV), which aims to limit the production, sale and exchange of seeds.
"That means they can control some varieties to be commercialized and can get a return on the investment they make - because it can take up to 10 or 15 years to develop new varieties," said Peter Button, UPOV Deputy Secretary General.
To meet UPOV criteria, commercial seeds must be genetically distinct, uniform and stable. Most common seeds do not fall into this category.
In addition to the protection of crop varieties, seed marketing laws in many countries prohibit the sale of uncertified seeds. The only legal option is to buy seeds from agribusiness companies, which means that more and more of the world's food sources rely on limited and scant genetic diversity.

There is no legal obligation to join UPOV. However, countries such as the United States, Canada, Switzerland, Japan, as well as member states of the European Union, are among the countries that use bilateral and regional trade agreements to pressure countries in the Global South, such as Zimbabwe and India, to join.
A number of critics have highlighted the imposition of uniform rules on a global scale. "We see this as neocolonialism that is destroying our livelihoods and the environment," said Mariam Mayet, director of the Center for African Biodiversity in South Africa.

Mayet called for an exception to the seed law to allow farmer autonomy to preserve indigenous agriculture which is "a foundation for ensuring ecological integrity, sustainability of nature, biodiversity, landscapes and ecosystems."
Around the world, food sovereignty movements such as the transnational La Via Campesina, the Sustainable and Holistic Agriculture Alliance in India, Third World Network in Southeast Asia, and Let's Liberate Diversity! in Europe, advocating for seed networks that allow farmers and communities to bypass giant agribusiness companies and manage seeds in their own way.
As has been done by rural sociologist Jack Kloppenburg over the past six years, who has packaged the seeds and shipped them to farmers through the Open Source Seed Initiative (OSSI).
Each OSSI seed package contains a statement that reads: "By opening this package, you promise that you will not limit anyone else's use of this seed and its derivatives under any patent, license or other means. You undertake that if you transfer the seed or derivative thereof. , You will acknowledge the source of this seed. "
Kloppenburg admits that the OSSI model is imperfect, because the seeds that are sown are not protected by law, they are vulnerable to appropriation by commercial interests. However, he believes this step is a way of sharing for the common good.