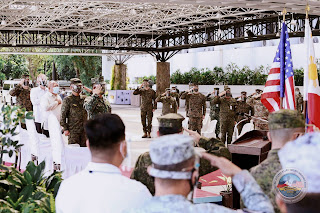 UMMATIMES - Between the Philippines and the US began two weeks of joint military exercises on Monday as tensions in the South China Sea heated up after hundreds of Chinese ships entered the waters of the Philippine Exclusive Economic Zone.
The two countries resumed drills suspended last year because of the pandemic after Manila recently accused China of carrying out territorial attacks, saying hundreds of Chinese ships manned by militias entered the South China Sea.
However, Chinese diplomats said the ships were only sheltering from the rough seas and there were no militias on board.
Philippine military officials said the Balikatan (shoulder-to-shoulder) combat exercises, which ended on April 23, would involve in-class exercises and simulations rather than field exercises.
The social distancing protocol significantly cut the number of participating troops to nearly a thousand from a plan of nearly 8,000 in previous years.
All ground exercises were canceled except for live fire drills that did not involve face-to-face training, Major General Edgard Arevalo, director of the exercises, said in his speech.
In a speech read by his deputy, Philippine Defense Minister Delfin Lorenzana said the joint exercise would strengthen the Philippines' ability to handle traditional and non-traditional security challenges amid the increasingly complex situation in the South China Sea region.
Lorenzana and US Secretary of Defense Lloyd Austin held a phone call on Sunday to discuss the exercise, the situation in the South China Sea, and recent regional security developments.
The two defense ministers also reiterated the importance of the Visiting Forces Agreement (VFA) between the two countries, which provides a legal framework under which US troops can operate on a rotating basis in the Philippines.
Philippine President Rorigo Duterte said the United States must pay more if it is to maintain the VFA, which he unilaterally canceled last year in response to the refusal of visas for his political allies.