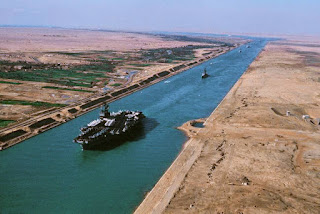 UMMATIMES - The Suez Kanal Authority is considering expanding the southern part of its waterway. This section is where the container ship Ever Given got stuck and blockaded the Suez Canal.
SCA chairman Osama Rabie said his party was looking for a crane that could potentially lower loads at a height of up to 52 meters. "Our procedures are good, we only aim to improve services," said Rabie.
The 400-meter Ever Giver stuck diagonally across the southern part of the canal during strong winds on March 23. As a result, the canal was stuck for six days and prevented hundreds of ships from passing. Ship s traffic congestion also significantly affects global flows.
After the evacuation process, the ship was then taken to a lake that separated the two sections of the canal where SCA was carrying out an investigation. Rabie said the data from the ship recorder had been deleted and submitted to the investigation committee. The ship then continues its journey after the procedure is complete.
"We are talking about two or three more days, God willing. But we will not take much time," he said.
SCA has said that it will continue to take a ship Ever Given size and strengthen its ability to tackle problems in the future. "We will try to get two more tugs, with a traction of more than 200 tonnes - 250, 280, depending," said Rabie.