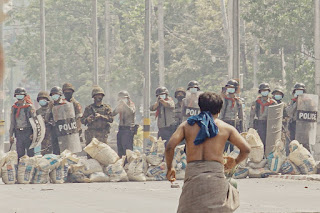 UMMATIMES - Thailand has drawn up plans to evacuate Thais stranded in Myanmar if the violence there worsens. Quoting the Bangkok Post on Friday, Thai Foreign Ministry spokeswoman Tanee Sangrat said the Thai embassy in Yangon reported that protests against Myanmar's military rulers continued, even though the delivery of food supplies was not interrupted.
Thai authorities have been closely monitoring the situation and agree the situation has not yet reached the point where Thais must be told to leave Myanmar.
"But if violence escalates, thus requiring evacuation, the embassy has a plan to bring Thai citizens home," said Tanee Sangrat as reported by the Bangkok Post, Friday (2/4/2021).
Air Force Chief ACM Airbull Suttiwan has instructed Wing 6 based at Don Mueang airport to prepare a fleet of C-130 transport aircraft if the government sets out on a mission to bring Thai citizens back to Myanmar.
"The commander of the air force gave instructions after the protests against the military coup started in Myanmar. The planes will fly immediately on the orders of the government," said Thai air force spokesman AM Thanat Chanamphai.
However, the Thai Ministry of Foreign Affairs will still assess the situation in Myanmar to decide when Thai citizens should be brought home.
Meanwhile, Tanee conveyed the government's stance on the situation in Myanmar, saying that the Thai government was concerned about reports of increasing casualties in the country.
The government has called on Myanmar authorities to exercise more restraint in dealing with protesters, trying to stop using violence and release more prisoners.
All involved are expected to seek solutions through peaceful means and constructive dialogue.
"Thailand is working closely with other Asean member states to ensure lasting peace for the people of Myanmar and restore normalcy to Myanmar as quickly as possible," said Tanee.
Regarding refugees who fled and those who crossed the border to Thailand, according to him, Thailand had experience in handling the influx of refugees in line with humanitarian principles.
"The injured refugees are allowed to enter Thailand to receive medical treatment at the hospital," said Tanee. As of March 31, a total of 2,788 refugees fled across the border from Myanmar. A total of 2,572 have returned home, with 216 remaining on Thai soil.
What remained were mostly children, women and the elderly. Covid-19 was tested on them and the results were negative.