The Jordan Crisis: Is there a role for Saudi Arabia? 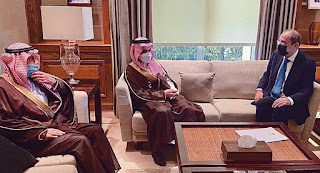 UMMATIMES - Saudi officials have denied allegations that they played a role in the alleged coup attempt in Jordan.
On Saturday, former Jordanian crown prince Prince Hamzah was placed under de facto house arrest and accused of undermining national security after attending a meeting of tribal leaders where King Abdullah, his half brother, was publicly criticized.
Prince Hamzah later released two videos to the BBC calling his country's government corrupt and incompetent, and saying that people were afraid to speak out for fear they would be harassed by security forces.
The crisis has subsided after mediation by the king's uncle, but there has been widespread speculation about Saudi Arabia's role in this crisis.
Saudi Arabia's foreign minister, Prince Faisal bin Farhan, flew to the Jordanian capital, Amman, with a delegation whose aim was, Saudi officials said, "to express full solidarity with Jordan's King Abdullah and his government".
This, they say, is the only Saudi position, and the notion that Saudi Arabia is involved in attempts to destabilize its neighbors is "made up nonsense".

So, is there something to do with Saudi?

As the crisis reached its peak over the weekend, the Jordanian government said their security services had been monitoring the activities of Prince Hamza and a dozen other officials for a long time.
They said an unnamed "foreign entity" was involved in what they described as a plot to destabilize the state and the ruling Hashimite dynasty - a charge Prince Hamzah denies.
It turns out that there are basically two separate problems here. The first issue was Prince Hamzah, the eldest son of the late King Hussein, who harassed Jordan's security chief after his recent meetings with several tribal leaders who were dissatisfied with the government. Another issue involved a number of officials who were suspected of having ties to at least one other country.
One of the most prominent figures arrested on Saturday was Bassim Awadallah, the former head of the Jordan Royal Court who is now the economic adviser to Saudi Crown Prince Muhammad bin Salman. He holds dual Saudi-Jordanian citizenship and has appeared as a moderator at the Saudi Arabia Future Investment Initiative forum.
The Washington Post newspaper reported that a delegation of Saudi foreign ministers refused to leave Jordan without bringing Bassim Awadallah back to Riyadh with them. This is not true, the Saudi government said.
Bassim Awadullah has connections with a number of powerful people abroad. Apart from his close position with the Crown Prince of Saudi Arabia, he has ties to the de facto ruler of the UAE, Crown Prince Muhammad bin Zayid. He is reportedly involved in the recent UAE-backed purchase of Palestinian land around Jerusalem.
Saudi Arabia and Jordan, although very different in terms of economics, have a lot in common. Their deep historical ties have existed for centuries and tribal relations cross the borders of the two desert lands.
When in my 20s I was living with Bedouins from the Banu Huwaitat in southern Jordan, they used to go back and forth to Saudi Arabia, exchanging goods and news while tending sheep, goats and camels.
When the remaining Sunni Arab Islamic kingdoms in other parts of the world were rocked by the Arab Spring rebellion, the rulers of both countries had an interest in supporting each other.
It is clearly difficult to see whether one of Jordan's strongest neighbors - Saudi Arabia or Israel - intends to destabilize this tiny, relatively impoverished kingdom. Under the reign of the late King Hussein and now his son King Abdullah, the kingdom of Jordan, the Hashimite dynasty, was able to withstand the beating of Middle Eastern political winds.
The peace agreement with Israel in 1994, although unpopular domestically, has brought regional stability. But Jordan has few natural resources and its already limited infrastructure has now had to deal with a large influx of refugees, first from Iraq and then from Syria.
The Covid-19 pandemic has temporarily shut down Jordan's tourism industry, dealing another blow to its weak economy. Meanwhile, dissatisfaction with what society sees as a mismanaged government continues to grow.
But governments in the Arabian Peninsula know that if the kingdom of Jordan falls, it could trigger a series of dangerous events in the region. Therefore, neighboring countries immediately announced a statement of support for King Abdullah.
Meanwhile, waiting in the shadows, both al-Qaeda and ISIS will be thrilled to see the chaos in a country that has been the key to stability in the Middle East.