The Peace Roadmap will be Implemented in Three Phases 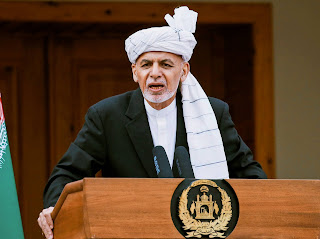 UMMATIMES - The President of Afghanistan, Ashraf Ghani, will implement a peace road map in three stages. The Afghan government hopes the road map to be proposed at the meeting in Turkey can push for a deal with the Taliban and a truce before the elections.
Washington is pushing for a meeting involving the United Nations to be held this month. So that the peace agreement between the Afghan government and the Taliban can be completed before May 1. Deadline for all foreign troops to leave Afghanistan.
Based on documents seen by Reuters news agency, Sunday (4/4) the road map is a proposed counterpart to Washington's plan that was rejected by the Afghan government. The US hopes the new interim government will soon establish a legal system that includes representatives of the Taliban.
The document shows that the first phase of Ghani's 'Reaching the Final Stage' proposal included reaching a political agreement and a ceasefire that was monitored by the international community. The second stage calls for elections and establishes a 'peaceful government' and imposes rules for the new political system.
The third stage builds a 'constitutional framework, reintegrating refugees and building' Afghanistan to move forward. Afghan government officials say Ghani has already shared the road map with foreign governments.
The schedule for the meeting in Turkey has not yet been decided but sources say it may be held in the next two weeks. The Afghan government and a number of politicians have said they must agree on an agenda for a meeting with Taliba before the meeting takes place.
In a statement last month the Taliban threatened to fight back if foreign troops did not withdraw from Afghanistan by May 1 according to a deadline agreed by former President Donald Trump's administration last year. This month President Joe Biden will be "difficult" to withdraw US troops by May 1.
He said the problems were "just some tactical reasons" but he did not believe US troops would remain in Afghanistan next year. The senior US government has said the Taliban is willing to extend the deadline and will not attack foreign forces but in return the Afghan government has released thousands of Taliban prisoners.
The Taliban spokesman in Qatar Mohammad Naeem said there was no such offer from his group.