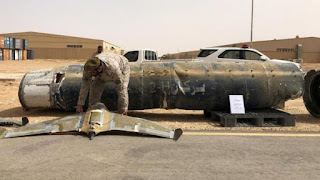 UMMATIMES - The Saudi-led coalition said on Thursday that it intercepted and destroyed two drones laden with explosives launched by Yemen's Houthis. State TV reported that the drone was heading towards the southern Saudi city of Khamis Mushait.
Houthi military spokesman Yahya Sarea acknowledged the attack, saying in a Twitter post that the group had fired two drones at the King Khalid air base in Khamis Mushait.
The coalition, which intervened in Yemen in March 2015, has frequently retaliated against cross-border attacks on Saudi Arabia with air strikes in Yemen. The Houthis ousted the internationally recognized government from power in Sanaa in late 2014, and now control much of northern Yemen.