The Slaughter of a Group of Men on Tigray 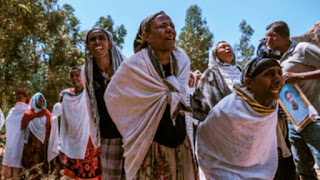 UMMATIMES - The attacks around the Tigray territory continued. The mass murderer was reportedly carried out by the Ethiopian army.
In a circulating, unverified video, as reported by CNN, it shows a mass murder near Mahibere Dego, in the mountainous area of ​​central Tigray.
In the unstable video, Ethiopian soldiers are seen gathering a group of young, unarmed men before shooting them at point-blank range. Soldiers were seen throwing or kicking their bodies from the rocky hillside.
The voices of soldiers can be heard in the recording urging one another not to waste bullets. The remaining bullets can be used to kill and ensure that no group is still alive.
They also appeared to support each other, hailing the killings as heroic and hurling insults at those detained.
The mass killings near Mahibere Dego are one of several that have been reported during the five-month conflict in Ethiopia. Thousands of civilians are believed to have been killed, raped and abused.
Ethiopia faces a string of tight scrutiny for human rights violations that may constitute war crimes in the Tigray region. Thousands of civilians are believed to have been killed since November, when Ethiopian Prime Minister Abiy Ahmed launched a massive military operation against Tigray's ruling party, the Tigray People's Liberation Front (TPLF). He sent national troops and militia fighters from the Amhara region, Ethiopia.