The Story of Polio Vaccine Officer Struggle in Afghanistan 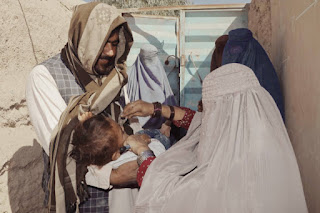 UMMATIMES - Afghanistan continues to try to inoculate millions of children to fight polio. The lockdown due to the corona virus pandemic has stopped efforts to eradicate this crippling disease.
Polio vaccination efforts have run into even more serious hurdles after the recent murder of three vaccinators. The three women giving polio vaccines were shot dead in two separate attacks on March 30. The incident occurred as they carried out door-to-door vaccinations in the eastern city of Jalalabad.
It was the first time a vaccination worker had been killed in a decade of door-to-door inoculation against a childhood disease in Afghanistan. Such attacks are more frequent in neighboring Pakistan where at least 70 vaccinators and security personnel associated with the vaccination campaign have been killed since 2011.
Afghanistan and Pakistan are two countries in the world where polio is still endemic. Both have had a disturbing increase in cases in recent years. In Afghanistan, 56 new cases were reported in 2020, the highest number since 2011, when 80 cases were registered.
A 21-year-old vaccination worker in Kabul, Adela Mohammadi, said her parents didn't want her to come out for the vaccinations after the three officers were killed in Jalalabad. "I left, but very worried. I was thinking what if someone was waiting for us and suddenly started shooting at us," he said.
Some people are also suspicious of vaccinations in Afghanistan. Although this suspicion rarely translates into violence. The new killings appear to reflect a disturbing increase in chaos in the past year.
ISIS has claimed responsibility for some of the violence. But the perpetrators of many of the attacks remain unknown, including the killings of vaccination workers.
The violence adds to new concerns as Afghanistan struggles to eradicate a disease that has been largely eradicated around the world. In children, polio can cause partial paralysis.
Since 2010, the country has carried out a routine inoculation campaign in which workers go door to door, giving vaccines to children. Most of the workers are women, as they can get better access to mothers and children.
Last year, authorities had to cancel four planned rounds of inoculation due to the lockdown against the coronavirus pandemic. They only managed to make two rounds of routine giving.
Authorities say nearly 10 million children now need the polio vaccination. Of these, the authorities were unable to reach the approximately 3 million children living in areas under the control of the Taliban militia.
Health Ministry spokesman Ghulam Dastagir Nazari, one round of injections was carried out earlier this year and a second round was launched on March 29. During the four days of the second round, more than 6 million children were vaccinated.
In Afghanistan's deeply conservative society traumatized by decades of war, some suspect the injection of the polio vaccine is a Western hoax. Many families also claim vaccines are prohibited by religion or harm children.
"There are families who don't even open the door for us, they just scream, if we don't go they will come out and beat us," said a three-year polio vaccine officer named Mohammadi.