The US May Not Need AstraZeneca Covid Vaccine; Anthony Fauci 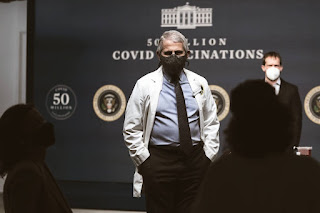 UMMATIMES - Director of the National Institute of Allergy and Infectious Diseases said Anthony Fauci said the United States might not need the Covid-19 vaccine from AstraZeneca. Even if it gets US regulatory approval.
The AstraZeneca vaccine, once lauded as another milestone in the fight against the COVID-19 pandemic, has been dogged by questions since late last year. Fauci said the United States has sufficient contracts with other vaccine makers to vaccinate its entire population, and possibly enough for booster shots in the fall.
Asked whether the United States would use a dose of AstraZeneca's vaccine, he said, it was still unclear. "My feeling is given the contractual relationships we have with a number of companies, that we have enough vaccines to meet all our needs without asking AstraZeneca," he said.
Late last year, the drugmaker and the University of Oxford published data from a previous trial with two different efficacy readings as a result of a dosage error. Then in March, more than a dozen countries temporarily suspended use of the AstraZeneca vaccine after reports linked it to a rare blood clotting disorder.
In March, the US health agency said data from companies provided an incomplete picture of its efficacy. A few days later AstraZeneca published results showing reduced efficacy, although still strong.