This city in Brazil is forced to dismantle an old tomb 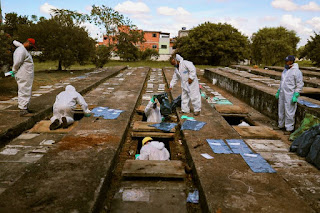 UMMATIMES - Sao Pauolo, Brazil's largest city, is accelerating efforts to empty old graves for the burial of COVID-19 victims. The move comes at a time when the number of funerals for patients who have died from COVID-19 in the country is hitting a new record.
Grave diggers at the Vila Nova Cachoeirinha cemetery in the northern part of the city work in white hazmat suits to dismantle the graves of those who were buried years ago, bagging their rotting remains for transfer to other locations.
The relocation of bodies is standard in funeral operations, said the city secretary in charge of funeral services, in a statement. But it has taken on new urgency as Brazil is suffering from an even worse wave of the coronavirus since the pandemic began more than a year ago.
Brazil's Ministry of Health reported 3,769 deaths from COVID-19 as of Thursday (1/4). Bolivia announced on Thursday that it would close its border to Brazil, citing concerns over a new variant of the disease being detected in its larger neighbor.
The day before, Brazil's biomedical agency Butantan said it had detected a new variant that had similarities to the first seen in South Africa, which appeared to be more resistant to existing vaccines.
The South African variant is more contagious, like the previous variant found in Brazil. Chile also closed its borders to all foreigners on Thursday, while tightening the lockdown, as it surpassed the 1 million cases recorded since the start of the pandemic.
"What is happening in Brazil is a global threat," said Jos Miguel Bernucci, secretary of the Chilean National Medical Association. "Closing the borders won't help us much with the variants we already have here, but with new variants we can continue to build."
Countries in the region have expressed concern that Brazil is a breeding ground for new variants, as cases spike and Brazilian President Jair Bolsonaro refuses to support the use of masks and lockdowns.
Brazil's outbreak is the second deadliest in the world after the United States, with an average of about 3,100 deaths and 74,000 new cases per day over the past week - a level that has continued to rise since February.
Sao Paulo also uses late-night burials to keep up with demand, with official cemeteries remaining open until 10 p.m. At the Vila Formosa cemetery, workers wearing masks and full protective gear have dug rows of graves under lights and the full moon this week.
The city of Sao Paulo recorded 419 burials on Tuesday, the largest since the pandemic began. If burial continues at such a pace, city hall says it needs to take more emergency measures. Brazil currently accounts for about a quarter of daily COVID-19 deaths worldwide, more than any other country.