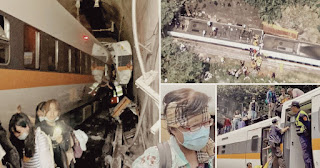 UMMATIMES - A train skidded from a tunnel in eastern Taiwan and is thought to have hit a truck, leaving at least 36 people dead.
The fire department said the train bound for Taitung ran off the tracks in a tunnel north of Hualien which caused several carriages to crash into the tunnel wall.
The transportation ministry put the death toll in the disaster at 36. Meanwhile, more than 72 people were injured and about 60 have been taken to hospital.
The train was carrying about 350 people, and rescue efforts are currently underway.