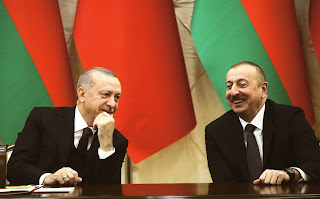 UMMATIMES - The Turkish government has ratified the treaty on trade and defense with Albania and Azerbaijan separately. In January, Turkey upgraded bilateral relations with Albania to the level of a strategic partnership.
"An agreement regulating administrative cooperation on free trade between Turkey and Azerbaijan was passed on Tuesday," the Turkish State News said.
Meanwhile, the agreement on defense industry cooperation with Baku which was signed on October 31, 2017, has also been ratified.
Azerbaijan and Turkey have enjoyed strong bilateral relations for decades. On April 1, the two countries introduced new identity cards that allow Turkish and Azerbaijani citizens to travel without a passport for up to 90 days.