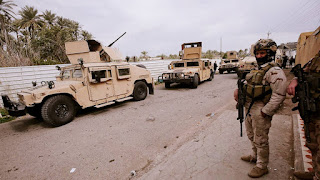 UMMATIMES - Two rockets crashed in a suburban area near a military air base housing United States contractors, Sunday (4/4). Security officers said there were no fatalities in this incident.
The Iraqi military said the rockets landed outside the fence at the military base. The security official said preliminary investigations found the attack had targeted Balad air base north of Baghdad.
However, the rockets fell early and hit the village of al-Bu Asi. The last attack on Balad air base took place on March 15 when five rockets hit the military base.
No group has yet claimed responsibility for this attack. But the Iraqi government reported a number of Iran-backed groups claiming similar attacks before.
The US government accuses Iran-backed militias of routine attacks on US facilities in Iraq. Including the attack near the US embassy in Baghdad.
Iran-backed paramilitary groups are demanding that all foreign troops withdraw from Iraq. Including the US troops, which currently has 2,500 troops left.
The US-led coalition fighting ISIS militias is still operating in Iraq. Likewise, Nato's troops were in charge of training Iraqi troops.