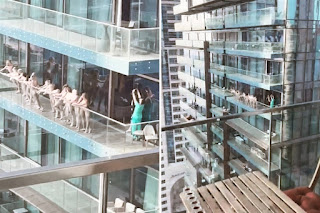 UMMATIMES - The United Arab Emirates (UAE) police arrested a group of people on the indecent acts clause. They were arrested for a video case showing several women posing naked on a balcony in Dubai City.
The perpetrators' authorities violated the UAE public decency laws. Like being naked and other 'lewd behavior'. The penalty was a fine of 5,000 dirhams or 1,360 US dollars and five months' imprisonment.
Under UAE sharia law, perpetrators of distributing pornographic material are punishable by imprisonment and a fine. Saturday (3/4) night, videos and photos of dozens of naked women appeared lined up on a balcony in an upscale settlement in Dubai. The video spreads on social media.
The video shocked conservative UAE society where kissing in public or drinking alcohol without permission could land a person in jail. The government newspaper The National reported the video was a "publicity stunt" without elaborating.
Dubai police said those arrested over the 'indecent' videos had been turned over to the public prosecutor. "This is unacceptable behavior, does not reflect the values ​​and ethics of the Emirati people," the police said in a statement, as quoted by the Irish Examiner, Sunday (4/4).
Compared to its neighbors in the Middle East, the UAE is quite liberal on several fronts. But it has strict laws regarding expressing expressions. The public can be jailed for comments or videos on the internet.
Telecommunications companies, which are majority-owned by the government, block access to large pornographic websites.