UK Finds 30 Cases of Blood Clots After AstraZeneca Use 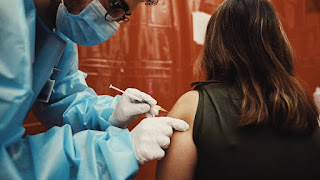 UMMATIMES - UK regulators say they have identified 30 rare cases of blood clots following the use of the AstraZeneca vaccine. The number of cases is 25 more cases than previously reported.
The UK's Medicines and Health Products Regulatory Agency (MHRA) said it had received no reports of blood clotting events following the use of vaccines made by BioNTech and Pfizer.
British health officials say they still believe that the benefits of vaccines in preventing COVID-19 far outweigh the possible risks of blood clots.
It is known that a number of countries limit the use of the AstraZeneca vaccine, while others have continued inoculation programs.
On March 18, Britain's drug regulator said that there were five rare cases of brain blood clots among the 11 million injections given.
As of Thursday (1/4), there were 22 reports of cerebral venous sinus thrombosis, a very rare brain clotting disease, and eight reports of other clotting events related to low blood platelets out of a total of 18.1 million doses of AstraZeneca given.
Earlier, British Prime Minister (PM) Boris Johnson became the first person to receive a dose of the Corona virus (COVID-19) vaccine, AstraZeneca in the UK. He assured AstraZeneca that there was no problem.
"I really didn't feel anything. It was very good, very fast," Johnson told reporters at St Thomas' Hospital, London.
"Everyone, when you get a notification to have an injection, go ahead and get it," Johnson said.
"It's the best for you, the best for your family and for everyone," he added, stressing the new green light being given by scientists in Europe for the AstraZeneca injection.
"The risk is COVID. This is a great thing to do," said Johnson.
Johnson received the AstraZeneca vaccine hours after French Prime Minister Jean Castex received an AstraZeneca injection live on television.
Germany, France and several other EU countries decided on Thursday (18/03) to continue using the AstraZeneca vaccine, after the European Medicines Agency (EMA) deemed the injection "safe and effective."