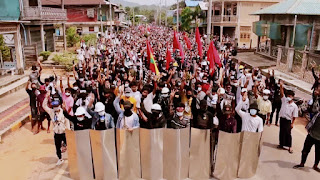 UMMATIMES - The UN Security Council has condemned the use of force against peaceful protesters in Myanmar that has resulted in the death of up to hundreds of civilians. However, he did not threaten to take action against the Southeast Asian nation's military, which carried out a coup since February 1.
The condemnation was approved by 15 members of the UN Security Council. The joint statement made expressed deep concern over the deteriorating situation in Myanmar and affirmed calls for the military to exercise complete restraint.
The statement drafted by Britain called for the UN Security Council to prepare to consider further steps, which could include sanctions against Myanmar's military. However, at China's insistence, references to further steps were omitted.
The reference to further steps was replaced in the final statement by a sentence that said the members of the UN security council stressed that they were continuing to monitor the situation closely and would remain active on the issue in Myanmar. The final statement also called on all parties in the country to refrain from violence, reaffirming the need to respect human rights and pursue dialogue and reconciliation in accordance with the wishes and interests of the Burmese people.
The UN Security Council also noted a statement from Secretary General Antonio Guterres calling for a firm and united response from the international community to the Myanmar issue. The UN's special envoy to Myanmar, Christine Schraner Burgener, warned that the country was facing the possibility of a civil war on an unprecedented scale.
Schraner Burgener, urged the UN Security Council to consider potentially significant actions to reverse the coup and restore Myanmar democracy. He did not specify what measures were deemed important, but gave a dire picture of a military crackdown and told the council in a closed briefing that Myanmar was on the verge of heading for a failed state.
Schraner Burgener urged the UN Security Council to consider all available options for taking collective action and doing what the people of Myanmar deserve to prevent a multidimensional catastrophe in the heart of Asia. He condemned the killing and arrest of unarmed protesters trying to restore democracy.
It quoted the Myanmar Assistance Association for Political Prisoners that as of Wednesday (31/3), some 2,729 people had been arrested, charged or sentenced and an estimated 536 had been killed since the military coup.