UN; Suggests to Raise Taxes for the Rich Profit during the Pandemic 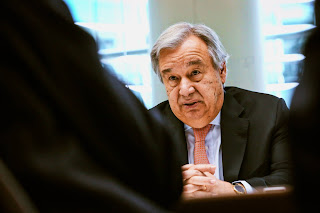 UMMATIMES - The Secretary General of the United Nations (UN), Antonio Guterres, urged the government to consider imposing a solidarity or wealth tax on the rich who made profits during the pandemic, Monday (14/2). This recommendation is in an effort to cut extreme inequality.
"I urge the government to consider a solidarity or wealth tax for those who profited during the pandemic, to reduce extreme inequality," Guterres said at a UN meeting on financing for development.
Guterres stressed that the government will ensure that the funds go to where they are most needed. "Recent reports show that there has been a $ 5 trillion jump in wealth of the world's richest person in the past year," said Guterres.
Guterres again said the Group (G20) of rich and large developing nations should extend the debt repayment suspension until 2022 and expand it. The move is to help developing countries and middle-income economies recover from the pandemic.
"But we need more than debt relief. We urgently need to strengthen the international debt architecture to end a deadly cycle of debt waves, the global debt crisis and the lost decades," said Guterres.
The UN Secretary General also repeated his call for a Covid-19 vaccine to be made available to all countries and asked for more money to fully fund the COVAX vaccine sharing facility. Of the expected target, only 10 countries around the world account for about 75 percent of global vaccinations.
"Advancing a just global response and recovery from the pandemic tests multilateralism. So far, this has been a failed test for us. Vaccination efforts are an example," he said.