US and Arab Countries Express Support to Jordan 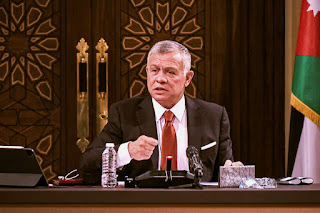 UMMATIMES - Jordanian security forces arrested a number of high-ranking government officials as investigations continued. The military also warned Crown Prince Prince Hamzah bin Al Hussein not to destabilize the country.
Petra news agency, Saturday (3/4), reported a senior Jordanian military official said a former minister and members of the royal family were also detained. The government denies detaining Prince Hamzah.
However, the former crown prince released a video in which he admitted to being under house arrest. He was asked not to leave the house and talk to anyone. The United States (US) responds to the potential upheaval that may occur in Jordan.
"We are closely monitoring reports and in constant contact with the Jordanian government, King Abdullah II is an important partner of the United States and we fully support him," the US State Department said, as quoted by Aljazirah, Sunday (4/4).
Saudi Arabia has also issued a statement saying it fully supports all decisions and steps taken by King Abdullah and His Majesty Prince Al Hussein bin Abdullah II in maintaining security and stability. So it is with Egypt.
"Support King Abdullah and his efforts to maintain the stability of the kingdom from any attempts to undermine it," said a spokesman for the Egyptian government on social media Facebook.