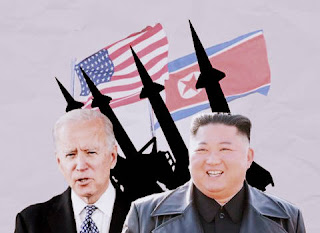 UMMATIMES - A US government official said the US would brief South Korea (South Korea) and Japan on President Joe Biden's government policies towards North Korea (North Korea). They will also discuss the rarity of semiconductor chips.
White House national security adviser Jake Sullivan will meet Secretary General of Japan's National Security Secretariat Shigeru Kitamura and South Korean National Security Director Suh Hoon. The meeting will take place at the US Naval Academy, in Annapolis, Maryland.
The first meeting of top officials from three countries since Biden took office on January 20, was held amid escalating tensions in the region after North Korea held a missile test last week. Biden has said the US remains open to holding diplomatic dialogue with North Korea.
But warned the US would respond if North Korea heated tensions. The US government official said the meeting in Annapolis would discuss North Korea's missile launches, the spread of the coronavirus in the country and North Korea's recent diplomacy with China.
"The main objective is to ensure we have a deep, shared understanding of the situation on the Peninsula, in North Korea," the official told reporters on Friday (2/4).
He noted a number of reports indicating the Corona virus pandemic has prompted North Korea to close all its borders. The White House has revealed little of Biden's policies regarding North Korea. It is not yet known whether they are offering concessions to bring Pyongyang to the negotiating table.
But US State Department spokesman Ned Price said denuclearization of the Korean Peninsula was still at the center of Washington's Pyongyang policy. He added that any approach to North Korea must be "in parallel" with Japan and South Korea.
Former President Donald Trump held three meetings with North Korean leader Kim Jong-un. But the encounter yielded no breakthrough other than withstanding nuclear and intercontinental missile tests. Biden attempted a dialogue with North Korea but the offer was rejected.
Pyongyang, which has long wanted international sanctions to be lifted, says the Biden government's first move was wrong. They say Washington has a deep hostility toward North Korea.
A US government official said a policy review on North Korea was in its final stages. "When we are ready to move forward, we are now ready to hold final consultations with Japan and South Korea," he said.