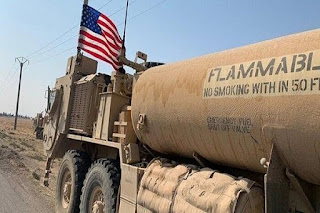 UMMATIMES - US troops have reportedly facilitated the transfer of 41 oil tanker trucks stolen by oil companies from Syria's northern Hasakah province to Iraq.
This information was published by the Syrian Arab News Agency (SANA), citing local sources. Russian media, Sputniknews.com quoted him, Tuesday (13/4/2021).
The tanker convoy also included several closed trucks. SANA reported that the oil was smuggled into Iraqi territory through the illegal al-Waleed or at-Tanf crossing.
This is not the first time SANA has reported such news, with a similar story published in December 2020. US troops reportedly looted oil from rural Hasakah and carried it across the border to a US base in Iraq.
Recent reports say the convoy was escorted by members of the QSD militia, also known as the Syrian Democratic Forces. While the QSD are the official defense force of the de facto autonomous government in northern Syria, they are accused of ethnic cleansing and using child soldiers. According to Syrian media, this is part of an ongoing operation to move oil and grain abroad, which has been devastated by a decade-long humanitarian crisis.
SANA said trucks were being sent from Syria to northern Iraq on an almost daily basis.This story comes just one day after SANA reported the US was transporting weaponry and logistics equipment from a base in Iraq to Syria's Hasakah province. The convoy included 59 air-cooled trucks, tanker trucks supplying military fuel and a motorcade of Humvee combat vehicles.
US Secretary of State Mike Pompeo (before changing governments) confirmed last year a US oil company would partner with Kurdish-led forces operating in northeast Syria. This is an act that the government of Syrian President Bashar Assad has strongly criticized. Entering President Joe Biden's administration, the leader of the White House was not as vulgar as Trump trying to safeguard oil in northeast Syria.
But Biden has quietly continued Washington's policy of smuggling black gold out of the country. In addition, Syrian media have reported increasing incidents of US involvement in the illegal export of foodstuffs out of the food-insecure country.
Fourteen trucks loaded with wheat from two silos in rural Hasakah have been smuggled illegally from Syria into Iraq. According to the news agency, wheat was sourced from silos in the cities of Tal Alou and Yarubiyah, which are known as major reserves of local food ingredients.
SANA attributed the theft to "US occupation forces," a term often used to denote US troops or their Syrian Democratic Forces militia allies.
The latest incident follows reports from last week of about 12 vehicles carrying wheat being brought into Iraq via the Semalka border crossing. Earlier, on March 28, about 38 trucks loaded with wheat were sent to Iraq via the al-Walid crossing point. Eighteen trucks of grain were reportedly smuggled through Semalka that same week.
Local media has reported a large increase in foodstuff smuggling since January, with the Biden administration appearing to have shifted away from its previously reported tactics of burning crops to prevent them from being harvested.
The increasing pressure on the country's food supply comes as the US and its Kurdish allies continue to occupy as much as 90 percent of Syria's oil-producing territory. Syria was never a major oil power before 2011, but the supplies it has are sufficient to secure energy independence, and to provide the country with modest income through exports.
Syria desperately needs a source of income to repair the estimated $ 400 billion damage caused by the foreign-backed civil conflict. But US and European sanctions, combined with Washington's occupation of the Arab Republic's main oil fields, made reconstruction difficult.
Last week, Majid Takht Ravanchi, Iran's Ambassador to the United Nations, said at a Security Council meeting in Syria that Tehran considered war using food and medicine and unfair and unacceptable. At the same meeting, Russian Deputy Foreign Minister Sergei Vershinin warned about 60 percent of Syrians do not have adequate access to food and medicine.