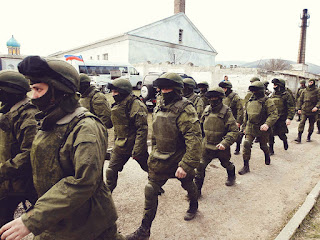 UMMATIMES - The White House said the number of Russian troops deployed on Ukraine's eastern border was greater than the number of troops when it annexed Crimea in 2014. The United States (US) is concerned about the increasing Russian aggression on the Ukrainian border.
White House spokesman Jen Psaki said the US was discussing its concerns with NATO regarding the deployment of Russian troops on the Ukrainian border. Psaki said that the United States was increasingly concerned about the recent escalation of Russian aggression in eastern Ukraine, including the movement of Russian troops across the Ukrainian border.
"Russia is now deploying more troops than in 2014," said Psaki.
Psaki did not specify the number of Russian troops deployed at the Ukrainian border. But it is the first time the Biden administration has provided an illustration of the scale of the buildup.
Clashes between pro-Russian separatists and Ukrainian forces have escalated in recent weeks. It is also feared that the buildup of Russian military forces will increase tensions in the conflict.
On Thursday morning (8/4), Ukrainian President Volodymyr Zelensky visited the front lines in the eastern part of the country. The last few days he asked for support from Western countries. US President Joe Biden last week expressed "unwavering support" for President Zelenskiy in his confrontation with Russia.
The war in Ukraine broke out after Moscow annexed Crimea in 2014. The conflict has claimed 13 thousand lives.
Kiev and Western countries accuse Russia of supporting separatists with weapons and troops. Moscow has repeatedly denied these claims. Peace talks brokered by France and Germany since 2015 failed to end the war.
The Kremlin has not denied the movement of Russian troops on the Ukrainian border. But they insist Moscow is not taking a threatening stance.