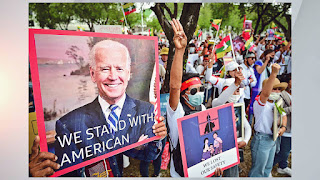 UMMATIMES - The US Treasury Department on Thursday (8/4) imposed sanctions on the gem company owned by Myanmar. The sanctions are an attempt to limit the military junta's ability to obtain funding sources.
"Today's action highlights the Ministry of Finance's commitment to rejecting Burma's military sources of funding, including from major state-owned companies across Burma," said Finance Department Director of the Office of Foreign Assets Control Andrea Gacki.
The gem company Myanma Gems Enterprise, is part of the Myanmar Ministry of Mines. The company is placed on the Finance Ministry's Special Designated Citizens list.
Sanctions in the form of a ban on Americans from doing business with a Myanmar gem company. Earlier, Washington imposed export restrictions on Myanmar by requiring suppliers to seek hard-to-obtain US licenses to ship certain goods.
The US issues permits and licenses to mine precious stones and collects revenue from the sale of gems and jade. Through these sanctions, Myanmar cannot export precious stones to the US. US Secretary of State Antony Blinken said sanctions against gem companies were imposed when military leaders attended a jewel emporium in Myanmar's capital Naypyitaw.
"The United States will continue to increase pressure on the regime's revenue streams to end its violence, release all those detained unfairly, lift martial law and national emergency, lift telecommunications restrictions and return Burma to a democratic path," Blinken said.
Myanmar is a major source of jade, rubies and other rare gems in the world. Myanmar gemstones are in high demand in China.
The United States, along with other Western countries, has sanctioned the generals involved in the coup and some of their family members. They also imposed sanctions on two conglomerates controlled by the military. The junta leaders have so far refused to turn around and end the coup.