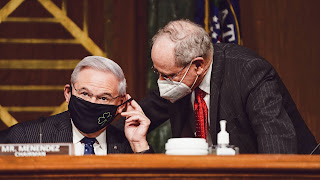 UMMATIMES - United States Senate Foreign Relations Committee leaders on Thursday proposed a bill to increase the country's ability to counter China's expanding global influence by promoting human rights, providing security assistance and investing in fighting disinformation. The draft 2021 Strategic Competition Law mandates diplomatic and strategic initiatives against Beijing.
The 280-page bill discusses economic competition with China. The bill also addresses humanitarian and democratic values, such as imposing sanctions on the treatment of the Uighur Muslim minority and supporting democracy in Hong Kong.
The bill emphasizes the need to prioritize the military investment needed to achieve the United States' political goals in the Indo-Pacific. Congress must ensure the federal budget aligns with the strategic imperative for competing with China.
The bill recommends a total of US $ 655 million for funding of Foreign Military Financing for the fiscal year 2022 to 2026. The bill also recommends a total of US $ 450 million for the Indo-Pacific Maritime Security Initiative and related programs for the same period.
That would broaden the scope of the Committee on Foreign Investment in the United States (CFIUS), which examines financial transactions for potential national security risks. However, like many provisions in the bill, the clause can be changed as it travels through the committee and the Senate in full.
The bill calls for increased partnerships with Taiwan. The bill states that Taiwan is an important part of the United States' Indo-Pacific strategy. As such, there should be no restrictions on US officials' interactions with Taiwanese partners. The bill also says Washington should encourage allies to do more about Beijing's "aggressive and assertive behavior", including cooperating on arms control.