US War Against China, If Taiwan Attacked? 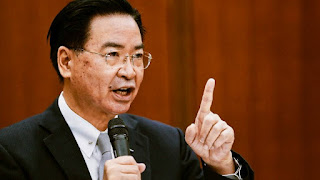 UMMATIMES - The United States military (US) has warned that China may speed up the time to take full control of Taiwan. The island, which China claims has been at the center of Washington and Beijing tensions over the past decades and is thought to trigger a catastrophic US-China war.
On Wednesday (7/4) US news agency, the Associated Press reported the concern as China began to use the military force they have built up over the years. China has become increasingly aggressive towards Taiwan and increasingly assertive about its sovereignty in the disputed waters of the South China Sea.
Beijing is also increasingly confrontational with Washington, something that has never happened before. This is evident in the war of words between top Chinese government officials and US Secretary of State Antony Blinken during a meeting in Alaska last month.
China's move on Taiwan will be a test of US commitment in supporting the island which China sees as its province. This issue gives the administration of US President Joe Biden two choices between leaving democratic Taiwan or risking an all-out war that most Americans have not thought of.
For a long time the US has helped Taiwan to defend itself. But it is not known how far the US will help Taiwan if China launches an attack on the island.

The US government has seen China as their biggest challenge in military, diplomatic and other fields. Washington is trying to prevent Beijing from replacing the US as a superpower in the US. Some US military leaders see Taiwan as a point of tension between the two countries.
"We are seeing signs the real risk is continuing to rise, the threats are visible over the last ten years, but in reality the next six years," Armed Forces Asia-Pacific Regional Command Commander Admiral Philip Davidson told the US Senate last month.
Days later Davidson's would-be successor, Admiral John Aquilino, rejected the six-year time frame. But in his Senate confirmation hearing he said US-China friction in Taiwan could occur more quickly than previously thought. "In my opinion this matter is closer than most of us expected," he said.
The Biden government did not announce US support for Taiwan but stressed it would deepen US relations with the island. China has also warned the United States not to interfere in issues they see as domestic issues.
US Defense Secretary Lloyd Austin called China a "back and forth threat" to the US. He stressed that the armed forces will adjust to the threat. For example, the Marine Corps is reconsidering China and Russia after focusing on fighting Middle Eastern extremists for the past twenty years.